According to coach Ole Gunnar Solskjaer, Marcus Rashford will almost certainly miss the first leg of the 1/8 Europa League round with AC Milan, along with 5 other stars of Man Utd.

Over the weekend, Marcus Rashford was unfortunately injured in the Manchester derby. The scan results showed that the British striker avoided ligament problems but the area around his ankle was bruised and swollen. Basically, this star’s condition is not so serious. 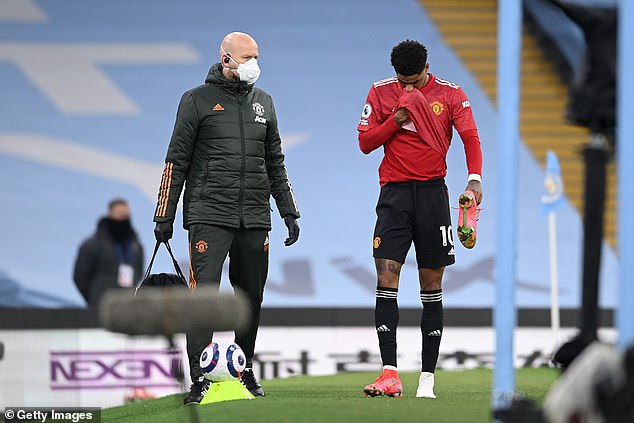 However, to avoid the risk, Rashford will have to rest and almost certainly cannot participate in the first leg of the 1/8 Europa League round with AC Milan on Thursday night. This information was confirmed by coach Ole Gunnar Solskjaer at the press conference before the game: “I don’t think Marcus can play against Milan.

Marcus is recovering and today he is out of practice. No matter how optimistic I am, I think that Marcus will miss the game against Milan and leave the possibility of playing at the weekend.

Since the beginning of the season, Rashford has played in all 43 Man Utd matches and scored 18 goals. In addition to England, there are 5 Red Devils who cannot or are likely to miss the match against Milan. Coach Solskjaer continued: “I am not sure if anyone will return.

David [De Gea] is absent. Donny [van de Beek], no. Paul [Pogba], no. Edison [Cavani], probably not. Juan [Mata], no, and Marcus [Rashford] most likely not. Thus, the situation is similar to the match against City but maybe we will lose more Marcus “.